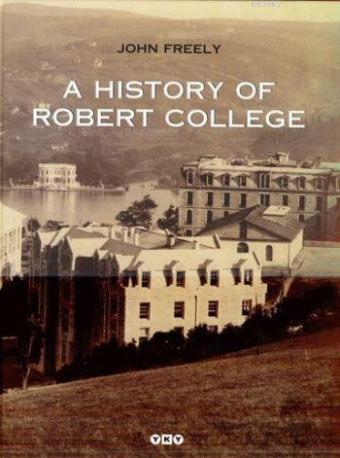 A History Of Robert College

This is the story of two American schools in Istanbul Robert College and American College for Girls both of them founded in the third quarter of the nineteenth century. The story takes the two schools through the last half-century of the Ottoman Empire and the first half-century of the Turkish Republic. The last part of the book tells the story of the founding of Boğaziçi University on the campus of the old Robert College in Bebek-Rumeli Hisar, and the establishment of the new co-educational Robert College on the campus of the old American College for Girls in Arnavutköy. The principal characters in the story are the men and women who worked at the two colleges as teachers and administrators, and the students who studied there, many of them going on to distinguished careers, including two prime ministers of Turkey and two of Bulgaria. Boğaziçi University and the new Robert College, both founded in 1971, continued a tradition that has now linked east and west for over a century, perpetuating bonds of culture and friendship that have endured through wars and the fall and rise of nations.


This is the story of two American schools in Istanbul, Turkey, both of them founded in the third quarter of the nineteenth century, and of the Turkish university that developed from them. The setting for the story is the Bosphorus, the incomparably beautiful strait that separates Europe and Asia in its course of thirty kilometers between the Black Sea and the Sea of Marmara, flowing at its southern end past the great metropolis of Istanbul, known to the Greeks as Constantinople and to the ancients as Byzantium, the only city in the world that stands astride two continents.
Both of the schools were products of American philanthropy and the Protestant missionary movement. The first was Robert College, a school for boys founded in 1863 by the missionary Cyrus Hamlin, a native of Maine. The college was named for Christopher Rhinelander Robert, a wealthy merchant and philanthropist from New York, who provided most of the funds for the school in its early years. Robert College was built on the hills above the villages of Bebek and Rumeli Hisarı on the European shore of the Bosphorus, about twelve kilometers north of the Golden Horn, the scimitar-shaped inlet that joins the strait on its western side just north of the Marmara. The second was the American College for Girls, orginally known as the Home School, founded in 1871 by the Womans Board of Missions of the Congregational Church. The Home School began its life in İstanbul, the Greek Constantinople, the old city bounded by the Golden Horn, the Marmara and the ancient Byzantine land-walls. Two years later the school moved to Üsküdar, on the Asian shore of the lower Bosphorus, where in 1890 it was chartered as the Constantinople College for Women, later to be known as the American College for Girls. The Girls College remained in Üsküdar until 1914, when it moved to a new campus on the European shore of the Bosphorus at Arnavutköy, four kilometers down the strait from Robert College.
During the century and more of their existence Robert College and the American College for Girls were among the finest schools in the Middle East, their graduates including four prime ministers, two of Turkey and two of Bulgaria, along with many others who distinguished themselves in the arts and sciences, as well as in education, social work, engineering, finance, business, industry, and government. At the first meeting of the United Nations in 1947 three nations were represented by graduates of Robert College. Nearly half a century later the first woman to become prime minister of Turkey was a graduate of both the American College for Girls and Robert College. The two American schools were founded under the Ottoman Empire, which from 1453 until 1923 had its capital in Istanbul. The Empire came to an end when the Turkish Republic was created in 1923, with its capital in Ankara. During the early years of Robert College and the Girls College their students were almost all from the Christian minorities of the Ottoman Empire, primarily Armenians, Bulgarians and Greeks. The first Moslem Turks graduated from the two schools in the early 1900s, and by the middle of the twentieth century the student body was predominantly Turkish.
The two schools were amalgamated in 1971 under the name of Robert College, a coeducational lycee using the buildings and grounds of the former Girls College in Arnavutköy. The buildings and grounds of the old Robert College were then taken over by a new Turkish university called Boğaziçi Universitesi, the University of the Bosphorus, founded in 1971. The University of the Bosphorus and the new Robert College both began their first academic year in September 1971, and in the years since then they have grown and flourished, continuing a tradition that has now linked east and west for more than a century, a bridge of knowledge perpetuating international bonds of culture and friendship that have endured through wars and the fall and rise of nations.