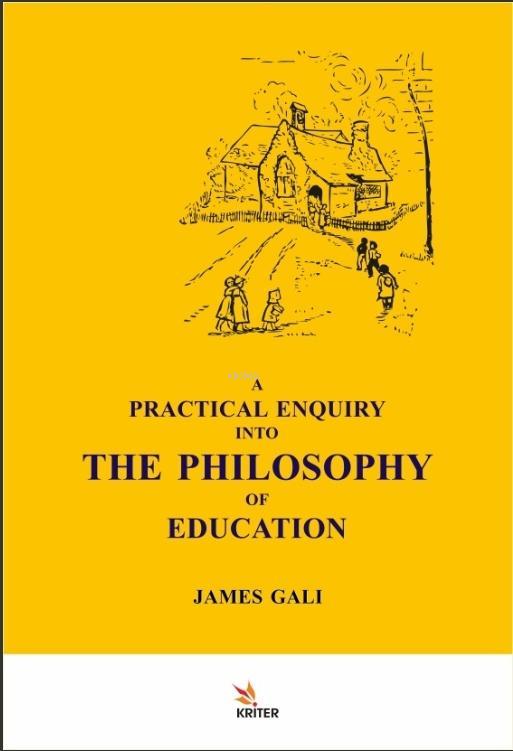 Emeği Geçenler :
A Practical Enquiry Into The Philosophy Of Education

That any rational and accountable being should ever have been found to oppose the
progress of truth, is truly humiliating; yet every page of history, which records the
developement of new principles, exhibits also the outbreakings of prejudice and selfishness.
The deductions of Galileo, of Newton, of Harvey, and innumerable others, have been
opposed and denounced, each in its turn; while their promoters have been vilified as
empyrics or innovators. Nor has this been done by those only whose self love or worldly
interests prompted them to exclude the truth, but by good and honourable men, whose
prejudices were strong, and whose zeal was not guided by discretion. Such persons have
frequently been found to shut their eyes against the plainest truths, to wrestle with their
own convictions, and positively refuse even to listen to evidence. The same thing may
happen with regard to education;—and this is no pleasing prospect to the lover of peace,
who sets himself forward as a reformer in this noble work.—Change is inevitable. Teaching is
an art; and it must, like all the other arts, depend for its improvement upon the
investigations of science. Now, every one knows, that although the cultivation of chemistry,
and other branches of natural science, has, of late years, given an extraordinary stimulus to
the arts, yet the science of education, from which the art of teaching can alone derive its
power, is one, beyond the threshold of which modern philosophy has scarcely entered.
Changes, therefore, both in the theory and practice of teaching, may be anticipated;—and
that these changes will be inconvenient and annoying to many, there can be no doubt. That
individuals, in these circumstances, should be inclined to deprecate and oppose these
innovations and improvements, is nothing more than might be expected; but that the
improvements themselves should on that account be either postponed or abandoned,
would be highly injurious. An enlightened system of education is peculiarly the property of
the public, on which both personal, family, and national happiness in a great measure
depends. These interests therefore must not be sacrificed to the wishes or the convenience
of private individuals. The prosperity and happiness of mankind are at stake; and the welfare
of succeeding generations will, in no small degree, be influenced by the establishment of
sound principles in education at the present time. Nothing, therefore, should be allowed to
mystify or cripple that science, upon which the spread and the permanence of all useful
knowledge mainly rest.