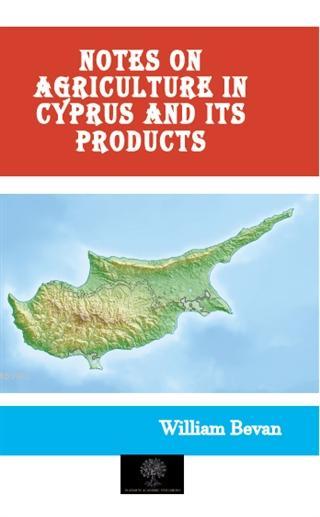 Emeği Geçenler :
Notes on Agriculture in Cyprus and Its Products

The Island of Cyprus is situated in the innermost basin of the Mediterranean Sea; about 40 miles distant from the Asia Minor coast on the north, and about 60 miles from Syria on the east, and 238 miles from Port Said to the south. It is the third largest island in the Mediterranean, ranking next to Sicily and Sardinia. The larger part of the Island is in the form of an irregular parallelogram, 100 miles long and from 30 to 60 miles broad; while on the north the eastern extremity runs out beyond this into a peninsula 40 miles long by 5 to 6 miles broad. The total area is 3,584 sq. miles. The main topographical features are the northern and southern mountain ranges running east and west and enclosing the great plain of the Messaoria. The mountains of the northern range are of an altitude ranging from 2,000 ft. to over 3,000 ft., the highest point being Buffavento, 3,135 ft.; those of the southern range are more lofty and culminate in Mt. Olympus, 6,406 ft. above sea-level. The rivers are nearly all mountain torrents, and are dr y from about July to November or December